East River Column : Hong Kong guerrillas in the Second World War and after

Mr Chan Sui-jeung
Chan Sui-jeung was born in Hong Kong in a family whose history in Hong Kong goes back some 200 years. He graduated from the University of Hong Kong in 1959. From 1968 to 1994, he was a career Administrative Officer of the Hong Kong Civil Service. From 1980 to 1984, he was District Officer, Sai Kung, New Territories Administration, where he met many of the veterans of the East River Column. For over 20 years, he has been an Honorary Research Fellow of the Centre of Asian Studies at the University of Hong Kong. 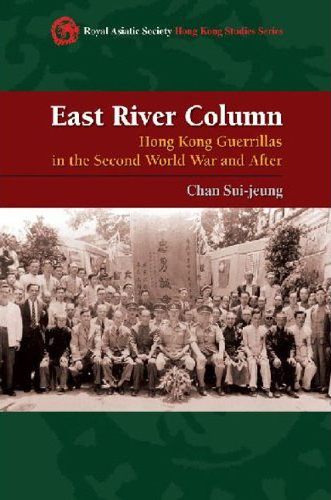 East River Column : Hong Kong guerrillas in the Second World War and after

Hong Kong's story in the Second World War has been predominantly told as a story of the British forces and their defeat on Christmas Day 1941. But there is another story: the Chinese guerrilla forces who harassed the Japanese throughout the occupation played a crucial part in the escapes from Hong Kong's prisoner of war camps and in rescuing Allied airmen. This neglected part of Hong Kong's war is Chan Sui-jeung's topic in this pioneering book informed by his many contacts with participants in the guerrilla warfare.

The guerrilla group usually described as the East River Column gathered momentum in 1937 after China and Japan embarked on full-fledged war. Chan reports on its precursors and the formation of more formal structures that provided the basis for the guerrilla activities in Hong Kong between 1941 and 1945. Just as the guerrilla's story starts before the Second World War, so it goes on after 1945 and is entwined with the civil war and the establishment of the People's Republic of China. An important and valuable part of this book recounts how the leaders of the East River Column fared in the period up to and after the Communist victory. The book also sheds new light on the struggle between the Guangdong party members and the cadres from the north and "the problem of Guangdong" as it was characterized by Mao Zedong.

This book thus finally gives due prominence to the role of the Chinese guerrillas in Hong Kong during the war, while at the same time setting that struggle into the broader contexts of Guangdong province, the long war between China and Japan, and the victory of the Communists and the early years of their rule in the South