Senator Vivienne Poy is the first Canadian of Asian descent to be appointed to the Senate of Canada, Chancellor Emerita of the University of Tortonto, as well as a historian, author, successful fashion designer, entrepreneur, and volunteer with many social and cultural organizations. She was awarded an honorary degree of Doctor of Laws from The University of Hong Kong in 2006.

Senator Poy is a noted academic, and the author of four books that explore the history of the Chinese in Hong Kong and Canada. As a result of her leadership in politics, the community, and in education, she has been designed as one of Canada's Top 100 Most Powerful Women, by the Women's Executive Network, in the 'Trailblazer' category. 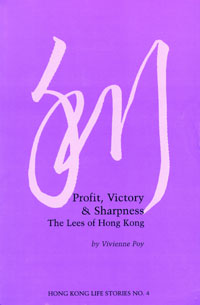 "Born of an encounter during the Opium War between imperial Britain and China's last dynasty, Hong Kong's story is vividly told through the life of one man - Richard Charles Lee - and his immediate family. This is not only an intimate portrait of a man who played a pivotal role in the years leading up to the handover in 1997 - it is also a revealing look at the former British colony from its earliest days until now, when it is a Chinese Special Administrative Region." - Frank Ching, author of ANCESTORS: 900 Years in the Life of a Chinese Family and China and Hong Kong: For Better or For Worse

"The story of Hong Kong's Lee Hysan Family is, in many ways, the story of Hong Kong. This intimate portrait provides a rich and insightful depiction of the remarkable contributions made by the family members to Hong Kong's development over different periods of modern history. There is a special focus on 'grandfather,' 'father' and 'mother,' those whom author Vivienne Poy knew best. Readers will also gain an appreciation of the spirit in which Poy herself has offered dedicated service to Canadian society as a Senator, University Chancellor, successful business woman and sponsor of countless charitable initiatives. This is a book that will inspire the mind and nurture the heart for all who read it." - Ruth Hayhoe, Professor, University of Toronto; President emerita, The Hong Kong Institute of Education