Light and Shade: Sketches from an Uncommon Life

Dr Solomon Matthew Bard was born in Russia, but lived most of his working life in Hong Kong. He studied music but, setting it aside as a career, graduated in medicine from the University of Hong Kong in 1939.

During the Second World War he served in the Hong Kong Volunteers Field Ambulance Unit and when Hong Kong fell was imprisoned by the Japanese. After the war he was director of the Student Health Service at HKU, then from 1976 to 1983 executive officer of the Antiquities and Monuments Office. He occasionally conducted the Hong Kong Philharmonic Orchestra and was the full-time assistant music director of the Hong Kong Chinese Orchestra from 1983 to 1987. 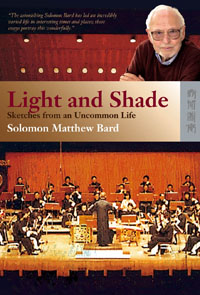 Light and Shade: Sketches from an Uncommon Life

Solomon Bard's life has been an extraordinary story of a peripatetic youth, of incident and adventure, and of varied enthusiasms pursued with great energy to a very high level.

Illustrated with a large number of photos, some remarkable survivals, this collection of autobiographical essays tells of Dr. Bard's childhood in Eastern Siberia, with a fascinating detour to Moscow and the Crimea while Russia was still in post-revolutionary turmoil. He moved on to Harbin for high school where the musical talent that is a strong thread running through this story began to blossom. As did so many Russian \x88mmigr\x88ms, he moved to Shanghai in the mid 1930s and spent his last school years there at the ‘Eton of China'. Good fortune and his usual determination saw him move again to study medicine at the University of Hong Kong. Typhoons and epidemics were just precursors of the trauma of Japanese invasion in which the author served as a medical officer in the Volunteers. His just-learnt medical skills were most valuable and much tested in his years as a prisoner-of-war in the Sham Shui Po camp.

After the war and a few years in the UK, he came back to Hong Kong. He founded the medical service at the University, and also created and led orchestras for both Western and Chinese music. While music continued to be an outlet for his remarkable energies, another activity – archaeology – came to the fore, and in these essays he describes both pioneering local digs and his worldwide travels to archaeological sites.

The reader will be swept along by the wide variety of experiences recounted, but above all by the zest, curiosity and capacity for enthusiasm that those fortunate enough to know the author cherish and admire.