November 24, 2009 is the 40th anniversary of the launch of the Hang Seng Index. Stanley Kwan – the architect of the Index – and his niece Nicole Kwan will talk about the Index’s origin and what it reflects about Hong Kong’s economic development.

In working on the memoirs, Nicole dug into her family’s century-long history in Hong Kong, with astonishing discoveries. She will share her findings with the audience: Tang Chi Ngong’s large family and his mansion on Gough Street; the flourishing of the yinhao (traditional Chinese banks) in Sheung Wan; the activities of the Chinese Communist Party in Hong Kong after the war; the ideological divide that split the family in 1949, and its aftermath…

Christine Loh, who also has a long family history in Hong Kong and has written her own memoir, will share her thoughts and the results of her research for her coming book.

Nicole Kwan has a BA degree from Smith College and MAs from Yale University and the University of Hong Kong. She has worked for international banks in Hong Kong, including Citigroup and Standard Chartered, for over twenty years and now spends her time between Hong Kong and California.

Stanley S. K. Kwan was born in Hong Kong in 1925 into a traditional Chinese banking family. He attended King's College until the fall of Hong Kong in 1941 and joined the Chinese army as an interpreter for US forces during the war. From 1962 until he retired in 1984, he headed the Research Department in Hang Seng Bank. He launched the Hang Seng Index in 1969, served on the government's Statistics Advisory Board during 1976-84 and was awarded the Member of the British Empire (MBE) in 1985. He now lives in Toronto, Canada. 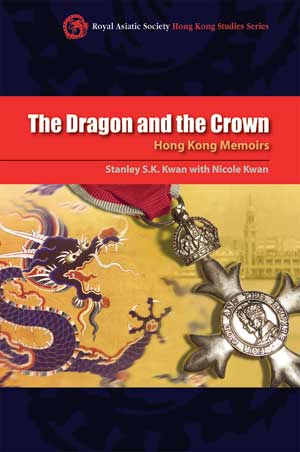 Wedged between the East and the West - the Dragon and the Crown - Stanley Kwan's life experiences reflect the forces pulling at Hong Kong. He was born into a traditional Chinese banking family but attended King's College under the British colonial system. Fired up by patriotism during the war, he joined the Nationalist Chinese army and served as an interpreter for American forces in southwest China. In 1949, two of his brothers went to the Mainland to join the socialist revolution. Although tempted to join, he stayed in Hong Kong, worked for a British firm and became a "China watcher" at the American Consulate General.

He finally joined a local Chinese bank - Hang Seng Bank where, as head of the Research Department, he launched the Hand Seng Index and witnessed the dramatic cycles of the Hong Kong economy. With the prospect of 1997, Stanley Kwan deliberated on his future and decided to retire to Canada in 1984, joining the tide of immigrants from Hong Kong.

The memoirs give a voice to the ordinary people whose lives have been profoundly affected by the dramatic changes in Hong Kong: from an entrepot to an international financial centre and from a colony to become a part of China. The book contributes to the ongoing search for Hong Kong identity and will resonate among those who live in or are interested in Hong Kong.