An apple a week / David Tang 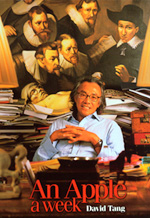 An apple a week / David Tang

David Tang was born in Hong Kong as a fourth generation of Cantonese refugees. In a Buddhist family, he was however baptised in order to attend the local Catholic school La Salle. He was then sent off to boarding school in England. He read Philosophy at university and went to Law College. In 1983-84, he taught at Peking University. He is passionate about things Chinese and is the founder of China Club in Hong Kong, Peking and Singapore; and Shanghai Tang, and recently, China Tang in London. His other businesses have involved oil exploration, gold mining, cigars, and advisor-ships to multi-nationals and international brands. He seems to have lived mostly on British Airways between London and Hong Kong, but since becoming 50 years old in 2004, chooses to stay at home in Hong Kong as much as possible with his family and 4 dogs, playing the piano, completing the daily cryptic crossword, and reading voraciously.

An apple a week is a collection of articles published in Apple Daily between 2004 and 2006.