Published by Public Relations and Development Team at 11:00 am under Breaking News 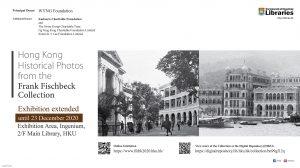 On 19 September 2019, The University of Hong Kong acquired the FormAsia Books photographic collection. A unique collection of rare, historic, original photographs dating from 1860 to the 1997 Hong Kong Handover.

The Frank Fischbeck Collection consists of a number of discrete sub-collections that comprise:

To process the Collection and make it available to Hong Kong and the world, HKU Libraries will:

•  Create and update the Frank Fischbeck Collection in the Digital Repository@HKUL;

•  Utilize the Collection for contributing to society and academia through exhibitions, digital access and other means of nurturing interest in Hong Kong’s rich history; and,

•  Ensure that the Collection remains a cultural asset for Hong Kong and the world for future generations.

Having been incorporated in Hong Kong in 1975, the goal of FormAsia Books was to utilise superb photography and eloquent essays to document Asian life for a Western readership, with particular emphasis on Hong Kong.  FormAsia Books Managing Director Frank Fischbeck’s photographs have won him the Overseas Press Club of America citation for his work in China where he covered the Cultural Revolution and the ‘Ping Pong’ diplomacy prior to President Nixon’s arrival in Beijing.  He has continued to record and preserve Asia’s immense diversity in a range of publications after settling in Hong Kong in the 1970s.

As a photojournalist, it came as second nature to chronicle the city’s evolution as it unfolded before him over succeeding decades. Together with his extensive travels throughout the region, this has resulted in a collection of some 24,000 images that have recorded and preserved Hong Kong’s modern history as well as the immense diversity of Asia’s cultural heritage.

Extending his career into publishing through FormAsia Books, Frank has also acquired and curated more than 1,200 sepia photographs that form part of the Archive, and which meticulously document Hong Kong’s history from 1860 to the 1960s, resulting in a visual record of the city’s evolution from its earliest years to the present day.  ​

This exhibition highlights a small segment of the collection based on Frank’s personal choices with his commentary provided for each image.

The exhibition is presented through six themes:

The acquisition of the collection has been made possible through a series of very generous donations from benefactors eager to see the collection remain in Hong Kong, intact and based at HKU.
We are deeply indebted to the WYNG Foundation for their major donation and unprecedented support and to the Kadoorie Charitable Foundation.

Comments are closed at this time.